Your Cart Is Empty

Phyllis Arnold trained as a commercial/graphic artist and has been a professional artist since the late 1960's. She has exhibited with the Royal Society of Miniature Painters since 1976 and, the Hilliard Society since 1985. She is a Past President of The Ulster Society of Women Artists.

Phyllis Arnold prefers to work from a sitting when colour notes and observations as to the character and demeaner of the sitter are recorded. Photographs are also taken to aid the construction and composition of the miniature. Head and shoulder size is approximately 3 ins x 2 ins, set in an oval gilt frame and available in a specially colour co-ordinated leather case lined with silk and velvet, with integral stand. The case as well as enhancing the miniature, will protect it from harmful sunlight when closed. 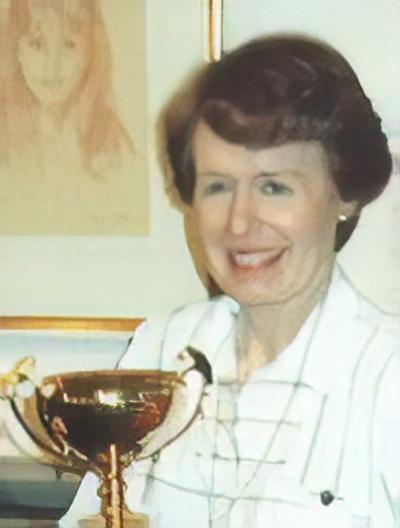 PHYLLIS ARNOLD is a past winner of the Memorial Gold Bowl of the Royal Society of Miniature Painters, London. The Artist carries on the 17th century tradition of painting portrait miniatures in the minute dot and stipple technique of the earliest miniaturists, such as Nicholas Hilliard 1547-1619, and Samuel Cooper 1640-1670, on vellum in watercolour. Portrait miniatures were mainly commissioned and given as love tokens. They were portable and in times of trouble and war, they were a constant reminder of a loved one. In the 17th century only the rich, powerful and of Royal birth, were able to afford this luxury.

Phyllis Arnold has been specialising in painted portrait silhouettes since the late 1960's and is considered the top silhouette portrait artist in the United Kingdom.

Her silhouette portrait of Queen Elizabeth II was a familiar sight, when it was chosen to enhance a number of fine limited edition porcelain commemorative pieces issued by Coalport Porcelain, to mark the Silver Jubilee. 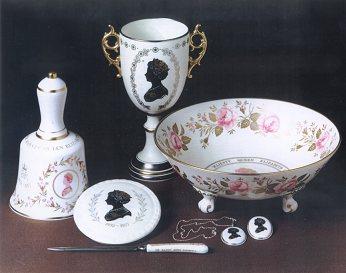 Phyllis also specialises in portraits of all sizes in various mediums, including sculpture. Her figurative and still life paintings are also eagerly sought after.

She was a Finalist in the Hunting Group Prizes in London for three years in the early 1980's. She then obtained the full Diploma of the Royal Society of Miniature Painters Sculptures and Gravers. In the same year she won the prestigious Memorial Gold Bowl of the Society which is open to international competition. Since 1970 she has exhibited annually in London in Professional Societies, Group Exhibitions and similarly since the 1970's in Ulster. She is a Past President of The Ulster Society of Women Artists.

Exhibitions in London include The Royal Academy Summer Exhibitions, the LLewellyn Alexander Gallery, the Medici Galleries, The Mall Galleries and in Ulster the Royal Ulster Academy. She has also shown in group exhibitions abroad ; in Frankfurt, Paris and The Smithsonian Institute, New York, winning numerous awards throughout her career.

Her portrait sculptures are the result of a lifetime devoted to delineating features and sensitively reading the sitter's feelings and character .She is very comfortable with this three dimensional form of expression.

The artist through specialising in portraiture causes her to work mainly from commission. however, her larger paintings as opposed to miniatures are available through auctions or various galleries , Society exhibitions and directly from the artist.

Working mainly from private commission gives a certain exclusivity to her work. She will be only too pleased to discuss your requirements and to add your commission to her achievements.

View the sculpture and portrait gallery here, or to commission a sculpture or painting, contact Phyllis here. 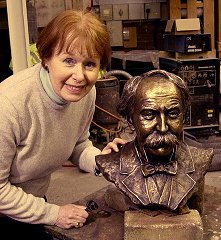 We use cookies for personalisation, analytics, and for other purposes. Learn more or change your cookie preferences. By interacting with this site, you agree to our use of cookies.